Website, SEO and Internet Marketing Services by Leads Online Marketing Charlotte NC. Learn more by visiting our partners: Home Improvement Estimates from the Best Local and Licensed Contractors With https://www.bizzibid.com; Eco-friendly and Green-Friendly Home Improvement Contractors available with https://www.ecohomesite.com; Free Estimates From Local Home Improvement Contractors by using the site https://www.fixthehome.com; Local-Attorneys.com provides directory listings of local lawyers and attorneys in your state or community, visit them today at https://www.local-attorneys.com; Roofing Directory is the perfect online directory for finding the right roofing contractor for your home's roof repair, roofing replacement or installation needs... learn more by visiting https://www.roofing-directory.com/ . HomeOwnerIdeas.com is a home improvement website dedicated to the homeowner. We strive to share the latest, greatest, most classic, most timeless and most awesome ideas that can be applied to your home.

Georgian style architecture, including Georgian style roofing, first originated in the year 1720, and is the name used by most English speaking countries to describe the architectural style from that time until 1840. Its name comes from the monarch King George the First and his three successors - George II of Great Britain, George III of the United Kingdom, and George IV of the United Kingdom. These four monarchs represent the consecutive British rule from the summer of 1714 to the summer of 1830. 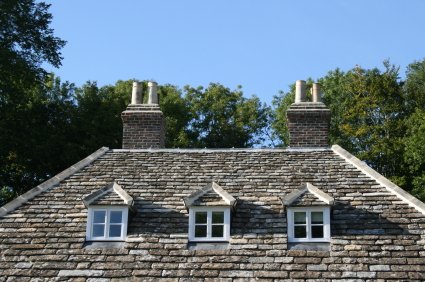 Georgian Architecture replaced the English Baroque style commonly found in Europe in the 1700s, with transitions taking place with works designed by the likes of James Gibbs, one of Britain's most prominent architects at the time. While his style can be classified as Georgian, it also included detectable influences form the English Baroque style, as well as nuances likely informed by his time studying to be an architect in Rome. Other prominent architects who pioneered this style were Colen Campbell, Robert Taylor, and John Wood the Elder, the latter two being held responsible by many as key developers of this type of design.

The term "Georgian" is rather wide in scope, and so must be seen as the header of other distinct sub-styles. Among them are Palladian Architecture (inspired by Andrea Palladio, an influential architect from Venice), Gothic, and Chinoiserie. Also included are Neoclassical (seen as a response to the Rococo style), the Regency style (which can be seen in Regent's Park in London), and Greek Revival, which occurred mainly in Northern Europe and the United States.

While Georgian architecture contains variable characteristics, some basic elements can be understood as standard. Among them are the tendency toward symmetry and what the European designers at the time referred to as "regularity" (adhering to classical rules). The most traditional materials for Georgian style buildings are stone and brick. The colors most commonly found in traditional Georgian buildings were red, white, and light brown. However, many colors are now found in modern homes that take cues from Georgian style architecture.

As for the Georgian style roofs, they are traditionally side-gabled (a triangular structure at both ends of the building), include a gambrel (a symmetrical two-sided roof with two downward slopes on each side) and are hipped (sides slope down toward walls of structure). The roofs also typically feature a chimney on both sides of the building.

Many modern homes can still be found with Georgian style roofs, which presents some advantages and challenges alike. This style still evokes a sense of historic significance, with its origin found almost three hundred years ago. For those with an interest in history and the story of design, a Georgian style soof is remarkable. Also, to many, it conjures the idea of elegance. Many prestigious properties feature Georgian style roofs, and therefore some associate this feature with class and grandeur. It remains, especially to those for whom symmetry is enticing, aesthetically pleasing.

Some of the challenges of living under a Georgian style roof relate to its interaction with inclement weather. This style of roof is said to be one of the worst in terms of protecting a home from hurricane damage. The gabled nature of this roof allows it to easily peel off in high winds, and can even catch wind like a ship's sail. Additionally, a Georgian style roof, with its hipped feature, often allows for very little space inside the roof. This not only cuts down on possible storage and/or attic space, but also may make it very difficult to gain access to this area for any maintenance or repairs.

As you can see Roofing-Directory is dedicated to being a resource for the American homeowner. We are also here to help save you money and we feel the best way for you to do that is to find your top available options from prescreened local roofing companies. Use the regional links below to browse our site to find roofers in your area today!

For those looking for additional home improvement remodeling ideas, DIY help and other tips visit HomeOwnerIdeas.com

Find local roofing contractors for inspections, repairs, replacements or new additions using our online referral service.
Need to fix your roof? Time to replace it? We've got professional roofers and roofing companies in California, Maryland and everywhere in between.
Homeowners: Find local top roofers for your next home improvement project. Contractors: Sign up and get top-quality local roofing leads today!